This is another post in The Skill List Project: an attempt to list all the skills involved in writing and selling fiction, particularly science fiction and fantasy. This time around, we’re looking at punctuation.

Like grammar, the point of punctuation is to help you and your readers make sense of what you’re saying. In particular, punctuation splits up strings of words into chunks; each chunk should have some kind of unity, whether it’s unity of purpose, meaning, imagery, or something else significant. (For the geeks among us, punctuation marks are akin to HTML tags: they block out the syntactic and semantic elements that go together to make up the whole.)

The preceding paragraph demonstrates how this works. Each sentence (ending in a period) is intended to be a single unified thought. The semicolon in Sentence 2 breaks the sentence into two sub-thoughts that are related but semi-independent; the colon in Sentence 3 separates the statement of a thought from an explanation of that statement. The parentheses around Sentence 3 indicate that it’s a side-remark on the same subject as the rest of the paragraph, but looking at the topic from a different angle. The commas throughout the paragraph serve to separate phrases from other phrases, making it easier for readers to grasp which words go together as a unit. Commas also serve to separate elements in the list “purpose, meaning, …”.

Like all writing skills, punctuation usage has both a formal and an artistic aspect. There are ways you shouldn’t use commas, semicolons, etc. or else you’ll confuse your readers and make them think you’re a lousy writer. On the other hand, you also have plenty of freedom for artistic choice; this very sentence uses a semicolon to separate its two parts, but you could also make a case for using a colon or a dash. Each option might give a (slightly) different flavor to how a reader receives the sentence.

For formal details on how to use each punctuation mark, I’ll pump once again for The Deluxe Transitive Vampire by Karen Elizabeth Gordon. However, you might also check out style guides like the New York Times Manual of Style and Usage or (for us Canadians) the Canadian Press Style Book. These guides lay down consistent rules of usage. Some of their choices are arbitrary—let’s not open a flame war about the pros and cons of the serial comma—but for most writers, choosing a particular set of rules and sticking with it will do just fine. (Of course, some SF stories deliberately play games with punctuation to evoke alien ways of thought…but that’s post-grad pyrotechnics, and right now, I’m just talking about bread-and-butter punctuation skills.)

One thing that deserves mention: some novice writers mess up badly when they punctuate dialogue. They don’t pay attention to what goes inside and outside the quotation marks, how you separate dialogue from framing phrases, and so on. This is basic stuff where there’s very little wiggle room: the rules are well-established and pretty much cast in stone, so you look like an amateur if you get it wrong. Get a good reference book, read every word of the section on quotations, and follow the frickin’ formulas. This is not an area where you can just wing it, unless you’re going seriously po-mo. (P.S. If you don’t know what “po-mo” means, you’re not ready for punctuation improv.)

The Beginning of Rhythm

The artistic side of punctuation brings us to a subject we’ll deal with at length in a future post: rhythm. As far as I’m concerned, rhythm is as important in prose as it is in poetry; it’s just more subtle.

If prose doesn’t flow, readers stumble over the words. Either they have to go back and read the sentence again, or else they skip past the awkward bit until their eyes reach a more congenial phrase. You don’t want to train your readers to skip hunks of your writing. You want them engaged with every word, and that means writing with a rhythm that fits what you’re saying.

In some cases, you might choose long and languid passages; in others, you may want short and choppy. Whatever is appropriate or artistically appealing, punctuation is a crucial tool for shaping the timing of your words. Most obviously, periods break up your prose into sentences—lots of periods mean lots of sentences, which makes for a punchy effect. As for other types of punctuation, the old cliché says they tell the reader when to pause…and that’s true. Punctuation puts little pauses between words (like the ellipsis in the previous sentence), thereby giving you a tiny bit of control over the reader’s tempo. Just like a comedian, you can deliver lines faster or slower to produce a desired effect, using punctuation marks to influence someone’s reading speed.

This can, of course, be overdone. Woe betide you if you use so much punctuation that the reader feels manipulated. Apart from commas and periods, I try to avoid using the same punctuation mark twice in the same paragraph. This isn’t an ironclad principle, but it’s a useful rule of thumb. For example, if I’m tempted to use another colon in a paragraph that already has a colon, I consider it a warning flag: maybe I’m getting repetitive or overly convoluted. Most of the time I take the hint and find some other way to put my thoughts into words.

Once again, it’s time to turn the podium over to you. Any thoughts or pet peeves about punctuation? How many exclamation marks can an author use before you start screaming? Talk that over, while I figure out the next skill that should be addressed. I’ve now covered the absolute basics—vocabulary, grammar, punctuation—so it’s time to move on to higher-level skills. Plotting? Characterization? Viewpoint? Hmm… 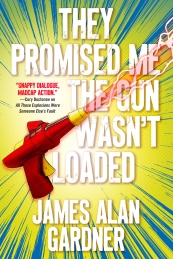