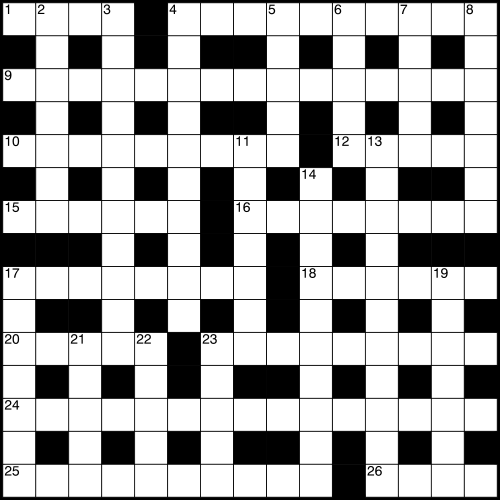 The other day, I met someone who had never heard of cryptic crossword puzzles. Since I’ve been addicted to cryptics for (OMG!) more than thirty years, I thought I’d talk about them today.

I assume that everyone reading this is familiar with normal (i.e. non-cryptic) crossword puzzles. A cryptic looks much the same, except that most of the answers have letters that don’t cross with other answers—every ACROSS word has letters that aren’t in any DOWN word, and vice versa. You can only complete the puzzle by solving every clue, both ACROSS and DOWN.

Another slight difference is that every cryptic clue tells how many letters the answer has. For example, if you see (7) at the end of a clue, it means taht the answer has 7 letters. Of course, you could get that from looking at the puzzle grid…but you might also see something like (4,3) meaning a 4-letter word followed by a 3-letter word, or (5-2) which means that the answer is hyphenated as shown.

But the major difference between cryptic and non-cryptic crosswords is that cryptic clues are deceptive. They don’t just give a synonym for the answer word; they usually give a synonym and a secondary hint, both disguised to make it hard to tell what’s what.

(I’ll pause while experienced cryptic solvers figure it out.)

Okay, the answer is GRACE. Midnight = the middle of “night” = “G”. A running event is a RACE. Add G+RACE and you get GRACE which can mean “elegance”.

The arctic is mapped with some of my minor thoughts(5)

The answer is NORTH. The arctic is mapped up north, and some of “my miNOR THoughts” is NORTH.

These are common types of clues. You can see more such standards in the Wikipedia entry on Cryptic Crosswords.

If you’re interested in trying a cryptic or two, the Globe and Mail offers a free online cryptic six days a week. Doing the puzzles online lets you guess and get immediate feedback by clicking the “Check” button. (Warning: Canadian spellings.)

I also recommend the Two-Speed Crosswords in the UK’s Sun. “Two-Speed” means that there are two sets of clues: cryptic clues, and “coffee-time” (i.e. normal) clues if you can’t solve the cryptic ones. I should note that the Sun puts the T&A in TAbloid, so be prepared to see links to sleazy articles. The puzzles are good, though.

Both the Globe and Sun puzzles are reasonably easy. Several other newspapers, especially British ones, also run regular cryptics, but they’re usually much harder. They may also require knowledge of cricket and British football teams. But hey, it’s an education just trying to understand the clues, even when you know the answer. And if you’re a writer, cryptics are also good for your vocabulary.